Find the location of your testmethod or failure with one double click.

About: Show in IDE

Currently when you are using the DUnit GUI Test Runner, and something goes wrong in a method, you have to locate that method in the Delphi IDE manually. Which means thinking real hard in what unit that method was, and then finding the source that now suddenly failed. With the Show in IDE extension you can use one double click to find the location! The only thing you need, besides this extension, is ModelMaker code explorer version 6.0 (or higher). If you don't know that tool yet, then now it is time to find out, but be warned, when you start using it you will be addicted and can't live without it anymore...

There are 2 ways in which the Show in IDE DUnit extension can work. The simple "it just works" way and the enhanced ways.

The simple way is as simple as:

The enhanced way is a litle more complicated:

The whole extension just consists of the 2 units that are above mentioned: GuiTestRunnerEx.pas and DUnitShowInIDEServices.pas So extract them from the download and put them somewhere where Delphi can find them!

But a screenshot might say more then a thousand words: this is after double clicking the failure in DUnit. The source code editor navigated to the correct line (see the > cursor indicator, another a ModelMaker Code Explorer feature.) 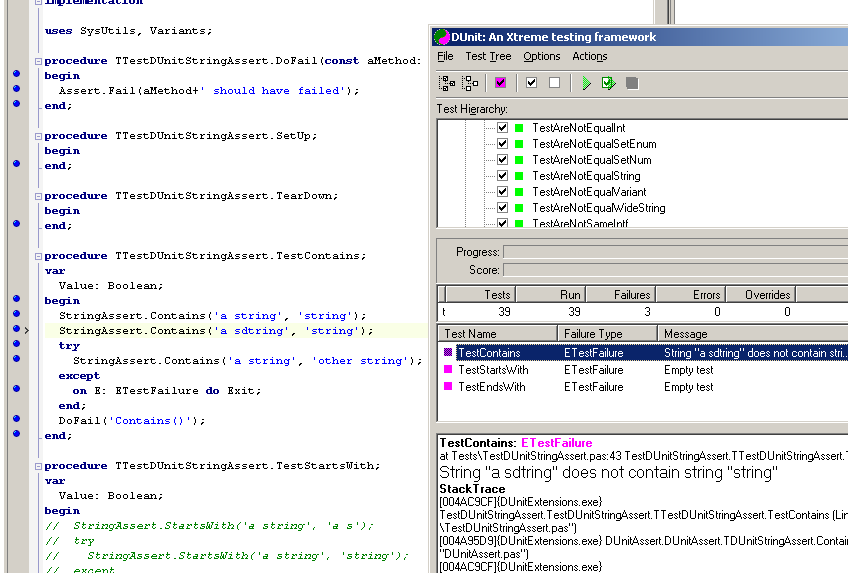